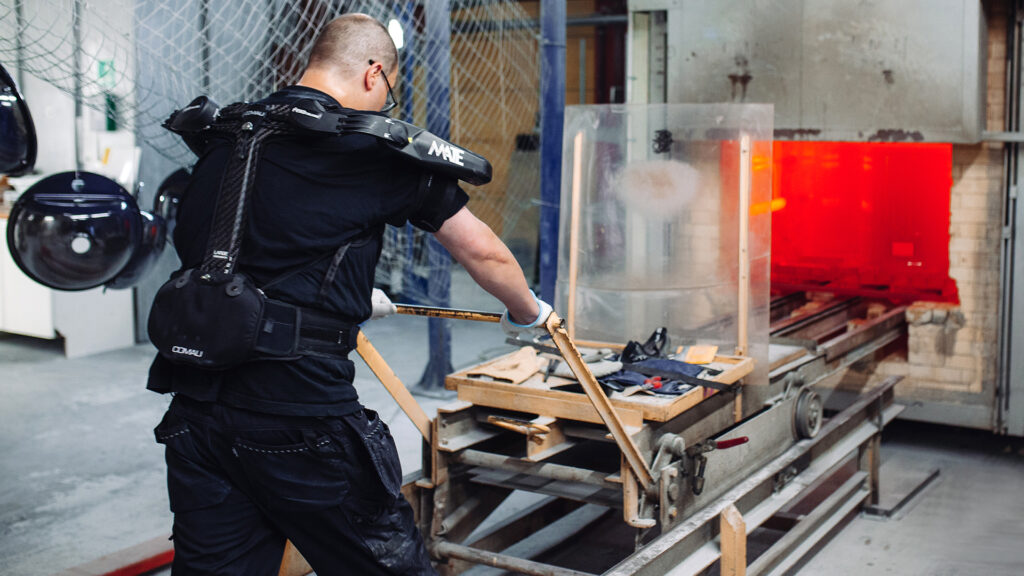 Sweat beads on the kiln operator’s forehead at Finemal Oy. The work is physically demanding on a summer’s day next to the 820-degree heat source. When lifting metal objects, the hands rise above a 90-degree angle, which strains the shoulders. The same situation applies to spray painters. The employees asked if the company could try the use of an external support backbone, i.e. an exoskeleton.

The know-how of coating steel products with enamel has accumulated at Finemal for over a hundred years. Finemal focuses on enamel objects, while furniture manufacturer Temal Oy has been operating as a separate company for a few years. The steel blanks are subcontracted, and after preparation work, they are sprayed with base and surface enamel between firings in the kilns.

Production manager Jarkko Salo says that the company has had an exoskeleton in a month-long trial. “Yes, this has been a positive experience. Here we see how the exoskeleton is actually used.”

Initially, the idea came from the employees. Finemal’s spray painter’s work differs from the usual in that it does not include protection and taping but six or seven hours of just spraying. One person handles close to 150 objects per day.

The exoskeleton gathers information about users’ movements and working positions. The measurements show the arm’s position and how long it stays up. “Every time the arm rises over 90 degrees, the movement puts much more strain on the shoulders and neck. The exoskeleton collects all the data, and we will know how stressed the arm is during the lifts.” EXOFinland Oy, the company that supplied the exoskeleton, has conducted surveys on those who have tried the device on Finemal.

“The spray painter has had both shoulders operated on due to stress injuries. The kiln operator moves the pieces from the injection line to the kiln line, and a lot of lifting is involved. He has been wearing an exoskeleton all day. On the other hand, the spray painter said that the exoskeleton helped hold the sprayer up and took the strain off the hand.” The use of the exoskeleton is preventive. “The work is physical; if you somehow manage to lighten it up, you’ll still have energy at home. Considering sick leaves, it’s great that your shoulders do not always hurt or you do not get tendinitis.”

Strong enamel is in demand

The boom in construction and renovation can be seen in Finemal’s order book. The enamel coating is perfect for demanding conditions where surfaces are exposed to moisture and weather. The enamel coating provides corrosion and impact resistance to the steel frame. The lightness of the objects is an advantage compared to, e.g. porcelain, while the glass surface repels bacteria and can be cleaned with solvents. Due to its properties, the enamel is used in hospitals, public toilets, or the walls of metro stations. The surface can also be decorated with large transfer images, which remain protected under the glaze.

Finally, let’s ask Martti Leskelä, the kiln operator who has tried the exoskeleton, about his impressions of the external support frame: “Yes, this helps with lifting. I have no sore shoulders at the end of the day. Normally they hurt, but when you use this, there are no problems. Sometimes it feels too light, and I have a bit of the Terminator feeling,” says Martti.

Finemal’s roots date back to 1920 when “Kone ja Siltarakennusyhtiö” established the enamelling production in Helsinki, Finland. In the 1930s, the company was acquired by Wärtsilä, in 1982 by Hackman and in 1994 by the Höglund and Zischka family. They chose to change the name of the furniture manufacturer to Temal Oy, which has been operating as a separate company for a few years.

Cheap and proud of it 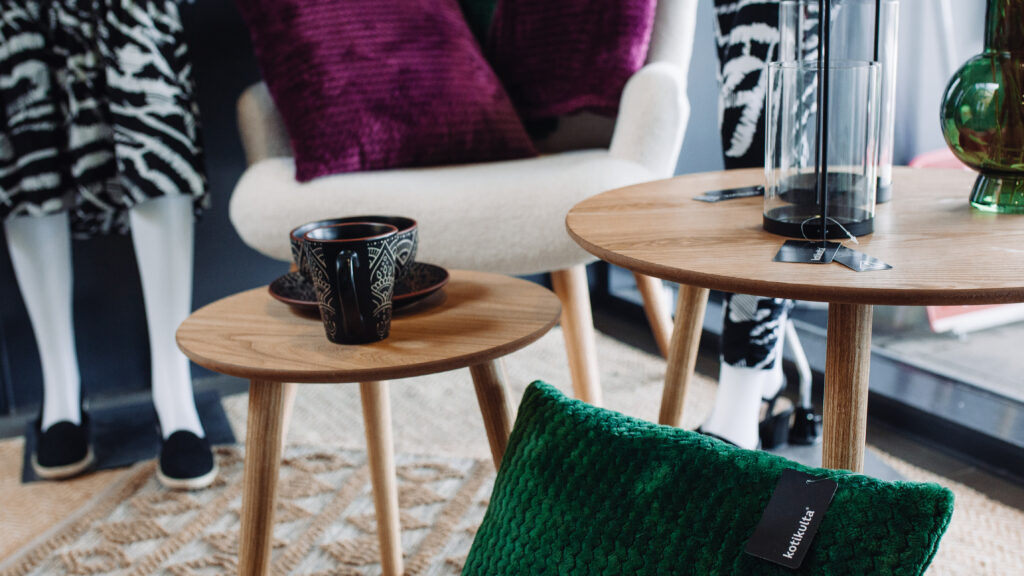 Cheap and proud of it

Tokmanni, with its 200 stores and the red buckets, is part of Finnish popular culture. “We are a low-cost store and proud of it,” says Veli-Pekka Ääri, Marketing and Communications Director of Tokmanni. “Mister Tokmanni of our advertisements is an international negotiator who travels worldwide looking for bargain products for Finns.” Tokmanni’s head office and […] 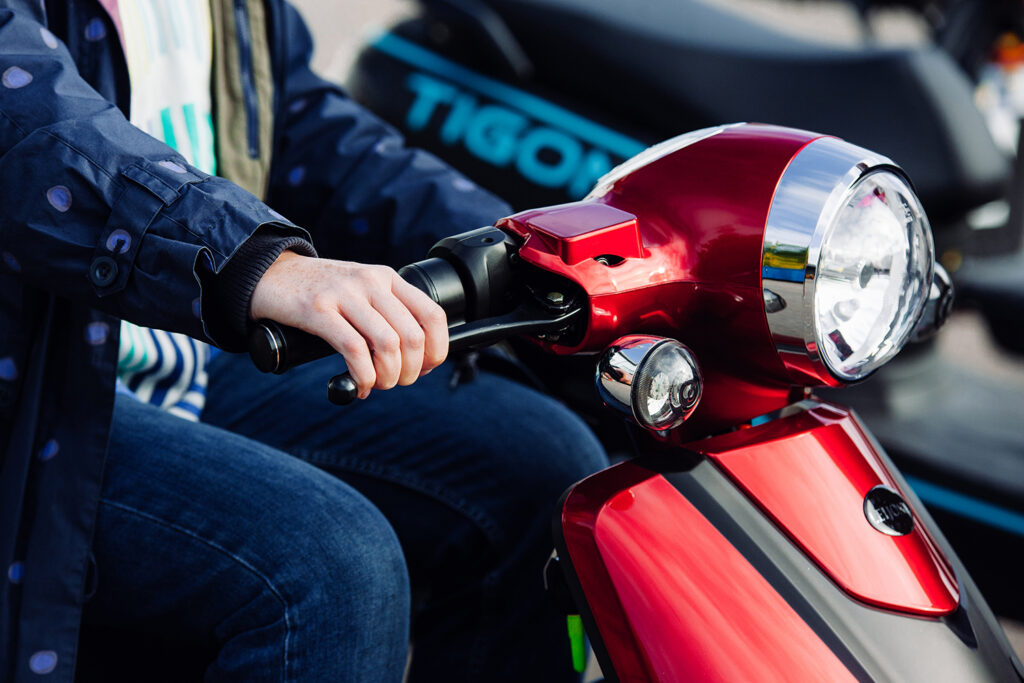 Skand Oy’s electric scooters are ridden all year round. In addition to Nordic seniors, the customer base includes young city dwellers and professional drivers, such as food couriers. Last year, the Nurmijärvi assembly plant completed more than 2,000 vehicles, and sales are growing fast. Why get an electric scooter for Northern climates?  Skand’s CEO Elias […]

You can find out more about which cookies we are using or switch them off in settings.

This website uses cookies so that we can provide you with the best user experience possible. Cookie information is stored in your browser and performs functions such as recognising you when you return to our website and helping our team to understand which sections of the website you find most interesting and useful.

Strictly Necessary Cookie should be enabled at all times so that we can save your preferences for cookie settings.

This website uses Google Analytics to collect anonymous information such as the number of visitors to the site, and the most popular pages. Keeping this cookie enabled helps us to improve our website.

Please enable Strictly Necessary Cookies first so that we can save your preferences!